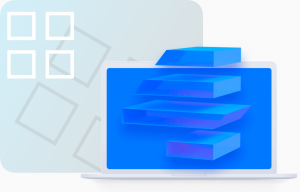 The demand for artificial intelligence development is increasing, as solutions based on this technology have already revolutionized various sectors. If you’re planning to implement machine learning or deep learning in your project or searching for a way to get into the AI business, this article is for you. Check which languages work for AI development.

AI has been around for quite long – the first tries of its development date back to the 50s. However, only in the past two decades have we started implementing it on a large scale in commercial projects. It’s no longer this mysterious tool fueling the imagination of the sci-fi writers, but rather a well-adapted technology that makes our everyday life easier. From language processing to forecasting stock market trends, AI applications are really broad, spreading across industries. The technology itself has great potential for improving business processes, but it also can bring a positive impact to humanity in general – take climate change forecasting or medical analysis with neural networks.

Whether you also are considering launching a project supported by AI algorithms, implementing an AI-based innovation, or simply searching for a way to get into the industry, you probably have already wondered, what’s the best programming language for AI? Well, these questions are always tricky, and we may disappoint you with our answer, but the truth is that it depends. The type of technique you choose to achieve AI, the purpose of its application, and the algorithms you pick – all these aspects may define which AI language will be the best for you.

​Why does AI require a particular approach?

In a nutshell, artificial intelligence is a method of making machines mimic human behavior. Its purpose is to solve complex problems that leave traditional programming methods helpless. Machine Learning (ML) is inextricably linked to AI since it allows to achieve it through trained algorithms. Everywhere where the traditional techniques fail, forcing the programmer to define numerous rules that won’t bring the satisfactory result anyway, AI comes to the scene as an effective alternative. Its models can learn patterns, making the problem-solving process incomparably more effective.

Now, to create and train these models, you obviously need a lot of data – and we really mean a lot. The AI programming language of your choice should deal well with their processing. That’s why the simplicity of the syntax, the number of available libraries, and access to big data platforms are such significant factors when choosing your best language for AI.

​​Python – why is it a top programming language for AI development?

Scrolling through the articles on the most in-demand programming languages, you may notice that Python is always on the podium. Often named the best language to learn next to Java and JavaScript, Python stands out with its applicability for machine learning and deep learning. With AI development gaining momentum, the demand for specialists familiar with Python is higher than ever. If you consider the career of a data scientist, knowing this language is an absolute must.

Python is a general-purpose language, but lately, it has found its broad application in AI. Its variety of prebuilt libraries makes it easier to create comprehensive ML and DL models for different purposes. You can use scikit learn for machine learning and statistical modeling, TensorFlow for deep learning – and so on. Other popular prebuilt libraries used for AI purposes include Numpy, Pandas, or Apache MXnet.

Why is Python the best programming language for AI development?

Python deals great with computer vision, natural language processing, or forecasting, and that’s just the beginning of the list!

That doesn’t mean it’s a perfect programming language, though. It comes with some flaws like low memory efficiency. It’s also quite slow compared to Java, since it needs an interpreter for a translation. Python’s dynamic typing doesn’t speed things up either and may lead to runtime errors. Python users often complain about whitespace-related issues – being used with the brackets, they struggle to switch to Python’s whitespace requirement. You should have that in mind while choosing the language for artificial intelligence programming. Nevertheless, don’t let these few disadvantages overshadow all the benefits of Python for AI.

​Java for artificial intelligence programming – is it a good alternative for Python?

As an object-oriented, transparent language, Java is one of the strongest competitors of Python when it comes to AI programming. Similar to Python, it stands out with the great library and community support, making AI development much easier, faster, and simply more enjoyable. Users appreciate it for its speed and portability – as we’ve mentioned before, Java isn’t interpreted but compiled, running across platforms thanks to the Java Virtual Machine.

However, in terms of artificial intelligence technology, its distinguishing feature is the seamless access to big data tools. Knowing Java, you can easily manage such tools as Hadoop, Apache Mahout, or Apache Spark. Java machine learning library selection may not be as wide as in the case of Python, but still quite impressive. Some, like Java Jfreechart, enable easy data visualization by building different charts (histograms, box plots, line charts, bar charts, scatter plots). It’s a great asset in data science. Let’s not forget that code maintenance is also crucial for AI development – and Java provides features that make debugging faster than ever.

And what about its flaws? Well, similar to Python, Java is memory-consuming. And even though it’s faster than Python, it still stays behind languages like Rust or C++.

​Other AI programming languages worth considering

Until now, we focused on Python and Java since they’re the most popular among AI engineers and data scientists, but the truth is, you can use other popular programming languages in AI. You could go for Ruby, or CC++ due to their speed and great community support, but you have to take into account that things won’t be that easy with these languages since they don’t give you access to numerous prebuilt libraries. Thus, you’ll have to put much more work into building particular algorithms for your AI project.

You may have heard about LISP, the second oldest programming language and the oldest associated with artificial intelligence programming. Created by John McCarthy in 1958, it has played a crucial role in the development of this technology. While it remains in use, it’s not that special anymore, since many languages have inherited its features. Considering that, we wouldn’t treat it as a potential match for your AI project.

If you don’t mind the lack of community support, but prioritize high speed, you could be interested in Julia, though. It’s one of the fastest programming languages out there, and thus, it can solve performance issues encountered while working with Python or Java. If you’re looking for a language to deal with complex data analysis, predictive modeling and visualization, Julia may be your match.

Python is unquestionable number one when it comes to AI, but there are other options worth considering, including another top object oriented programming language, Java. Once you face this dilemma, map your priorities to make the best choice. And if you’re in doubt, we’ll be glad to help you with our expertise! We also offer Python development services, so if you need a professional backup, we’re here for you.